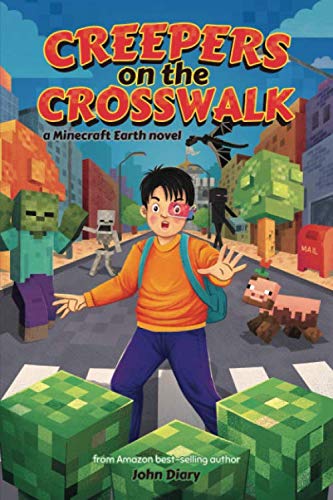 Owen has been counting down the days until Minecraft Earth, the game of his dreams, is released. Now, it’s here and it’s better than he could ever have imagined. A mysterious figure, going by the name marchHARE, has hacked the game so that the whole city is one massive adventure.
Everywhere you turn, the world of Minecraft is there. There are zombies in Owen’s bedroom, Endermen at the end of the street, and happy Mooblooms chewing grass in the bathroom. To get to school, Owen has to trek through a shadowy jungle and when he gets there, kids are setting traps in the corridors and leaving notes for each other with signs that the teachers can’t see.
Owen and his best friend, tech-genius Aya, love living in a parallel universe that belongs just to them and the other kids. It’s a place they can decide on their own rules, be who they want and literally build the world of their dreams. They couldn’t be happier, but a storm is coming. No one knows who this marchHARE is or what they want. When the Minecraft world turns dark with hordes of zombies wandering the streets and kids getting hurt for real, Owen and Aya start to worry that it’s nothing good…
Creepers on the Crosswalk is a thrilling adventure-comedy for kids eight to thirteen who love the game Minecraft Earth. It is filled with white-knuckle moments, elaborate mysteries to solve, real relationships and laugh-out-loud lines. It’s Alice in Wonderland meets Artemis Fowl meets Diary of a Wimpy Kid set in the exciting world of Minecraft Earth. Readers’ imaginations will be set on fire as they learn about the technology that makes their favourite game possible and consider when games might actually hurt us.

“We found diamonds! Yes!” Logan shouted. “Haha, you noobs,” he said, pointing at the other kids playing nearby on the playground. “We’ve got diamonds and you dooooon’t!”
“Oh boy,” Aya said.
“Yeah…” Owen agreed.
He watched as Henry and Logan stood together talking about the diamond pickaxes they were planning to make.
“Hey,” Aya snapped her fingers twice next to Owen’s ear. “Wiring?”
“Oh.”
Owen examined the right side of the doorframe, where Redstone wiring ran to a dispenser on top of the wall. Aya was better at this stuff than Owen. She was probably only asking to be nice.
“Looks good,” he said and then pointed her phone up at the dispenser. “But what is that—”
“Great!” Aya grabbed back her phone as Owen watched it go. “Hey Logan!”
The boy turned, looking confused. “What?”
“That’s not a lot of diamonds. That’s nothing. I’ve been collecting a ton of diamonds,” she said. “Here.” Aya tapped on her phone to invite Logan and Henry to the buildplate for the fort. “I put them all in this chest,” she said. “Take a look.”
Logan raised an eyebrow at Henry and then walked toward Aya. Henry trailed behind, looking sideways at Owen.
“You don’t have diamonds,” Logan said to Aya. “You have to do lots of adventures, and you don’t really—”
Logan came marching toward the double-doors and the wooden box past them. He stepped onto the block right in front of the doors which compressed slightly as he did.
“That’s a pressure plate—” Owen started to say.
And then the dispenser overhead spat out a stream of lava right over Logan’s head. It flowed over him and pooled on the ground at his feet.
Aya cackled.
“Hey!” Logan said. His character had ‘died’. He’d been kicked off of the buildplate and could no longer see the fort. “Hey! You—”
Aya couldn’t stop laughing. Even Owen sniggered.
“Whatever…” Logan said, trying not to look annoyed. “I knew you didn’t have diamonds anyway!”
Aya was too busy laughing to bother with a comeback. The boys stomped away as Aya slowly came back to her senses.
“Oh, man!” she said finally. “I love this game.” 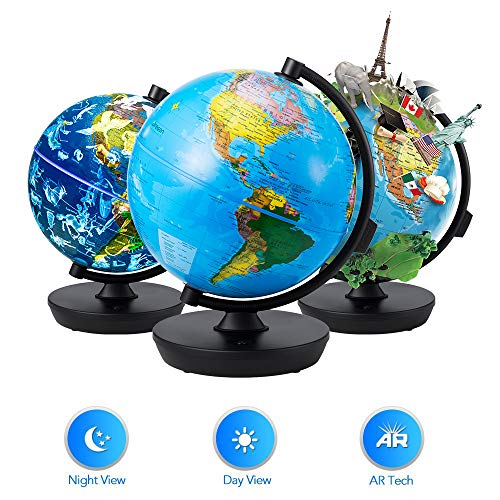 Every family needs a world globe! But how to choose a most suitable one?
Now here is a globe not only possesses characteristics of ordinary globes, but also with AR technology built in. A Smart Home product you should never miss!
ThisSmart Globebrings the “entire” universe right to young adventurers’ house.

3 IN 1 GLOBE. The Enlightenment Education of Geography and Astronomy!
Like other ordinary globes, you can see and learn about the Earth we live in, continents, oceans, countries and all states of U.S.. And by night, press the button to turn on the backlight and you can see a total of 88 constellations with their names and illustrations. Let your kids find their own constellation in the sky, it must be an interesting interaction between you and them.

Built-in Augmented Reality Technology! Education in Amusement!
You can enjoy the AR app experience through this smart globe as long as you download the customized APP from App Store or Google play.

FOUR OPTIONS
Animals– Visualize the animals with AR and listen to their sound in real life!
Dinosaurs?- Learn and interact with the dinosaurs right in front of your eyes!
Landmarks– Learn the history of all the countries and their iconic landmarks!
Climates– See the climate of different parts of the world!
You can snap a picture and share it via social media.

The ‘wikipedia’ Function
Get a comprehensive overview of more than 195 countries around the world. Global trotting right from your fingertips!

Learning is Fun!
Challenge your knowledge with the rich database of quizzes and games.

What we provide for you is not only a smart world globe, but also the top after-sales service. 2-year warranty, 90 days money back guaranteed! What are you still hesitating about? Just “Add to Cart“, explore the world with your kid! 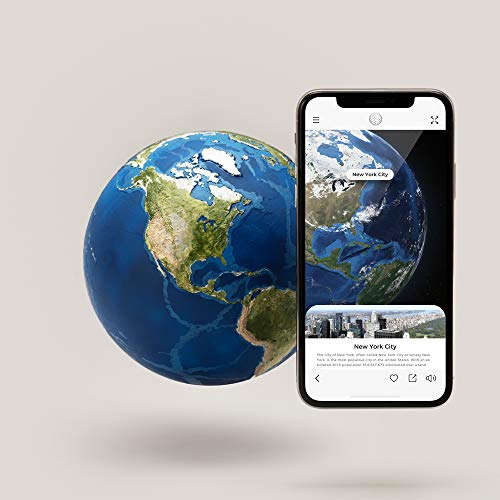 AstroReality
AstroReality is an award-winning brand that innovates by merging physical products with Augmented Reality. Creating immersive, tactile methods to explore science, space, and life, AstroReality brings space experiences to life in the palm of your hand.

How to use Augmented Reality Features:
Step 1: Download the AstroReality EARTH App from the App Store or Google Play. Launch the app.
Step 2: Tap “Scan” to add a product on the top of the page.
Step 3: Scan the QR code, on the last page of the user manual.
Step 4: Tap the EARTH model you just added.
Step 5: Place the model on the graphics beacon (AR Marker) with the logo facing you. The best viewing distance is 4 – 8 inches from your device.
Step 6: Start to calibrate EARTH model to your device. Enjoy the live view of our planet Earth.

Detailed information available on our homepage…